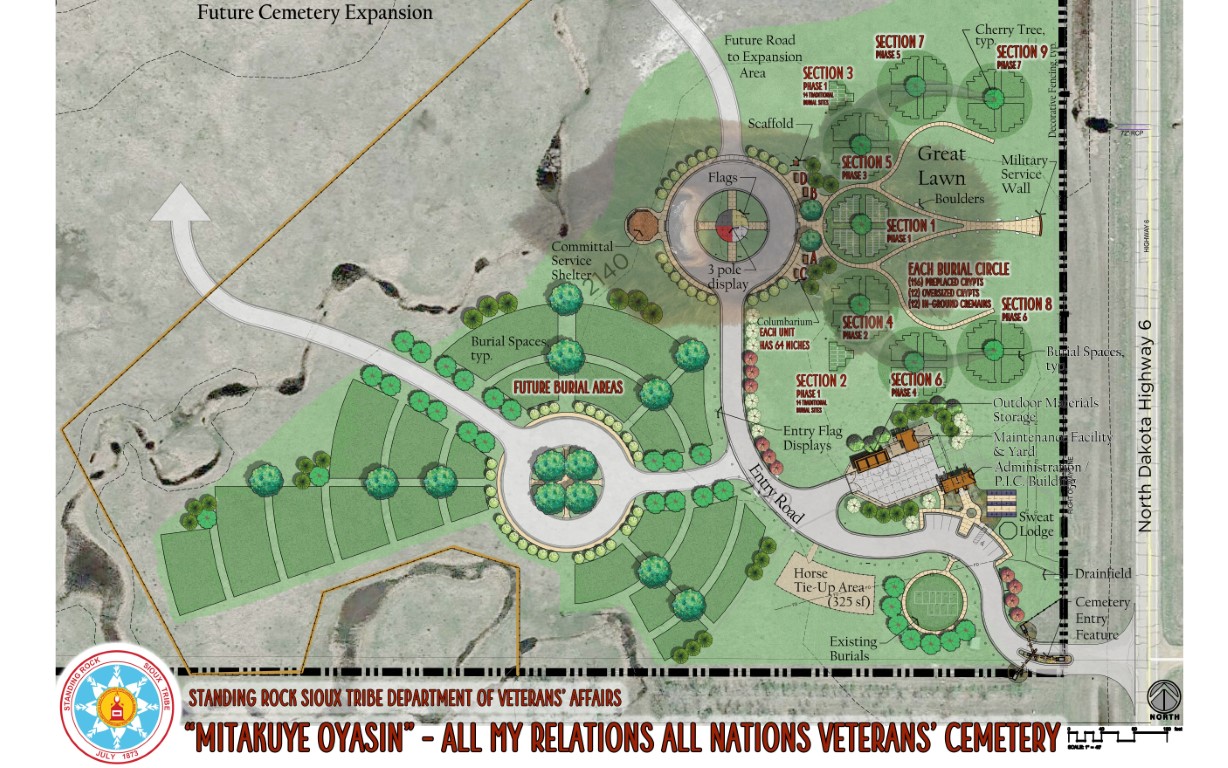 In 2017, the Standing Rock Sioux Tribe was awarded a $4.9 million dollar grant through the Department of Veterans Affairs. When the Standing Rock Sioux Tribe interviewed consultant teams to design their cemetery for their fallen warriors the aim was to properly commemorate their heroic brethren in a fitting burial ground, on Tribal lands. Travel distance to a veterans cemetery became a hardship on the friends and relatives of the Standing Rock fallen akicita. This meant that when the time came, that the Standing Rock Sioux Tribe could give those akicita a burial fully befitting their U.S. servicemen and servicewomen status, while simultaneously honoring the traditions of their culture. Native Americans serve in the armed forces at a higher rate than any other ethnic group. The use of renewable energy was a requirement in the selection as well as working with the SDSMT students on the sustainability and renewable design. The administration building will use solar energy to reduce grid connected energy. The system can be added on as needed to make the facility off-grid in the future if desired.

Wyss Associates employed a Native American student from the Cheyenne River Sioux Tribe to assist in the solar energy system component of the design. Wyss Associates, Inc. was selected to provide professional design services for the 80 acre cemetery. The project was delivered in three phases. A Master Plan phase outlined the requirements of the project, and aligned it with the Department of Veterans Affairs National Cemetery Administration’s guidelines found in the VCGS Master Plan Requirements document. The Design Phase further developed the plan, and allowed the completion of the Schematic Design through Construction Documentation for the project. The Construction Phase delivered a cemetery in a sacred, culturally significant setting that honors those who gave their all to their country. The layout of the cemetery is in the shape of a bison head with 7 burial circles within the horns. The great bison of North America are a very powerful symbol within the Sioux culture. The entrance to the cemetery is a 60’ tall 3-pole structure signifying the tipi with a layout representative of the Lakota 3-pole people.

Scope of work included a Committal Shelter, Memorial Wall, Administration & Maintenance campus, and parking. Phase one of the cemetery has a total internment of 198. Our sustainable goals included minimal impact on site by using the existing landform, and adaptive, water efficient native plantings. Renewable or recycled materials were used in construction..